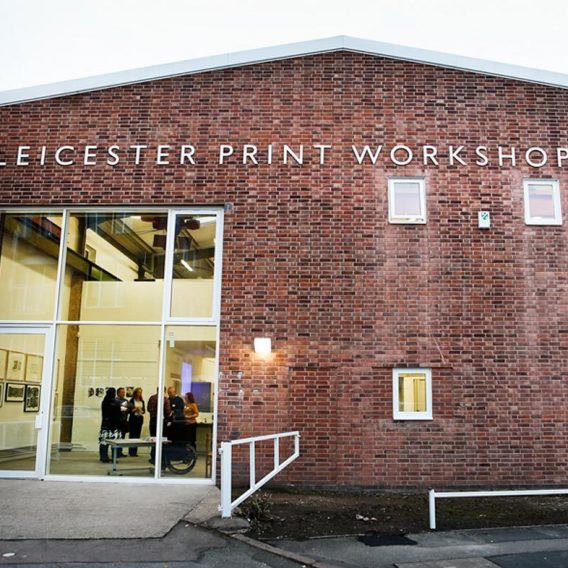 For In Another Place Leicester Print Workshop presents a new commission by Theo Miller, a visual artist and printmaker from Leicester. He gained a first class degree in Fine Art from De Montfort University in 2014 and remains in the city. He has exhibited in the UK and won the Print Futures award in 2017.

The “other place” is a term used to describe the other House in Parliament. By convention, members of the Lords do not mention the Commons by name and MPs do not refer directly to the House of Lords when they are speaking in the Chamber. Miller references this notion of an implicit “other place” in his billboard work. Focusing on the gap between what is known and what remains unknown about a place, Miller employs letterpress techniques to present an enigmatic view of Oadby’s Twin Town; Norderstedt in Germany. The choice of letterpress printmaking to create the artwork for the billboard reflects its advertising heritage, but rather than a traditional typeface slogan, Miller has used 12pt metal monotype borders to create an image of the Norderstedt skyline, which has then been enlarged to highlight the intricacies and subtle irregularities of the original print. This interplay between the heritage of printmaking, letterpress and the digitally printed image reflects the twinned towns’ industrial past and modern future. Town twinning was first intended to foster friendship and understanding between different cultures and between former foes as an act of peace and reconciliation. Miller’s work is an aperture to “another place”, a peace offering to Oadby’s European twin in the United Kingdom’s post EU referendum climate.

Leicester Print Workshop hopes that its billboard will introduce printmaking to new audiences and raise its profile, as well as develop artistic talent by supporting a young artist to create his first artwork for an outdoor space.

The billboard will be found at the entrance to the Asda car park in Oadby in Leicester. It connects to a group exhibition also entitled In Another Place at LPW, in which Miller’s work features.

Find out more about Leicester Print Workshop and Theo Miller.