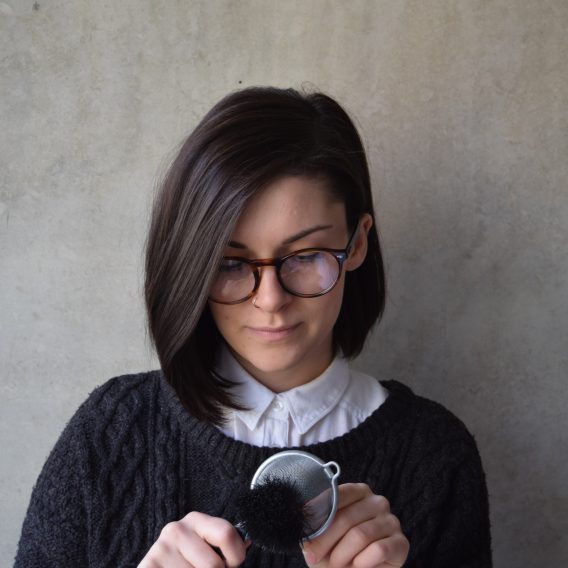 Charlie graduated in 2015 from Manchester School of Art, with a BA Hon in Three-Dimensional Design. Since then, she has exhibited in galleries and shows across the country, receiving accolades from selection panels as ‘one to watch’; Last year, she was selected by the Crafts Council for their prestigious development programme ‘Hothouse’. Most recently, along with her billboard artwork for ‘In Another Place’, she has been commissioned for a public art project in Greater Manchester, which is due to launch towards the end of this year. Alongside her own making practice, Charlie also assists in developing and presenting projects for other organisations and artists.

What inspires you as an artist? Where do you influences come from?

I am inspired to make work to intrigue and engage others, which could provide an escape, a moment of delight, curiosity or even awe. My influences come from miscellanea; objects that exist around us, things we have found/designed, sites of intrigue, archives of wonder from past lives and ‘ways of doing things’. Making for me is a way of understanding and reinterpreting all of this to make others think.

Through my works, I endeavour to explore value and meaning of unsung objects. It is important that I engage with materials directly and make things with my own hands. My choice of materials generally come from everyday items, which I combine with meticulous processes and repetitive techniques.

Questioning the everyday and ordinary is at the very heart of what I do; the concept of the project epitomises what I try to challenge as an artist, so for me it was the perfect context to test my work. Allowing art to be in an everyday context removes any barriers to access, and in this respect allows my work to be opened to a wider audience. Within my making practice, I strive to work with a variety of different organisations, supporting the promotion of how people can benefit from engaging with creativity. So, it is in keeping for me to represent the values of UK Young Artists, CVAN and other project partners, leading arts organisation within the East Midlands, to assist them in their quest to promote the opportunities they offer.

The scale of In Another Place, both in terms of the size of artwork and potential audience reach, is my largest yet. I hope from being involved in In Another Place, I gain the experience to be able to explore large scales like this in the future. I hope to contribute to a programme of meaningful engagement, that will influence how I actively engage with audiences in the future. I also hope, through the project, a gain a new network within the region of artists, organisations and many others.

It can be argued that there are a variety of barriers that exist in preventing people from experiencing visual arts in a traditional setting, whether they be for financial, physical or social reasons.

Whenever I am making an artwork, it is important for me to be hands-on with materials. Similarly, I believe audiences are more inclined to engage with an artwork if they can physically interact with it. Traditional settings, like art galleries, can inhibit this with acrylic cases and railings, preventing audiences from getting up-close. Placing art within the everyday can better enable those who wish to access to more readily and potentially surprise those who may not usually engage.

My billboard artwork, Pineapple NCM 1891-54, is all about making connections between the billboard site as it once existed and how it now exists.

The idea developed after a visit to see Nottingham City Museum and Galleries’ Lace Archive which is housed at Newstead Abbey. It was important to me that the artwork for the billboard responded to the site as well as represented the values of UK Young Artists and myself as an artist, so I took the initial starting point of Nottingham’s lace industry.

The site itself has strong links to the lace industry; historically a factory existed on the site. A workshop was built in 1824 by the machine builders and lace manufacturers Hancock & Booker. Along the years it was passed among different owners, however the lace industry has always been connected to the intersection of Gregory Boulevard.

Looking through the archive, it was apparent that many of the lace designs were influenced by lavish trends of the era. I was shown a beautifully intricate black lace cape, labelled as NCM 1891-54, which principally used a pineapple as the pattern. This story began to translate the connection to the site as it now stands, with a fruit market sited on the intersection. Historically the pineapple signified wealth; now it represents the diverse communities that develop as a benefit of the movement of people and exchange of goods throughout the world.

Familiarity. I hope the image may trigger a consciousness with people, through the everyday materials I have used. The image is very much linked to Nottingham and Gregory Boulevard intersection, so I hope people will feel a personal connection to what the artwork represents.

Very – By doing so it gives people the opportunity to benefit, contributing to the wider picture of engagement in arts and cultural activities throughout the East Midlands, UK and society.

A unique opportunity to experience a gallery without walls. A pioneering project, opening eyes to art in the everyday.